Geared DC motors can be defined as an extension of DC motor which already had its Insight details demystified. DC Motors convert electrical energy (voltage or power source) to mechanical energy (produce rotational motion). They run on direct current. The DC motor works on the principle of Lorentz force which states that when a wire carrying current is placed in a region having magnetic field, then the wire experiences a force. This Lorentz force provides a torque to the coil to rotate. A geared DC Motor has a gear assembly attached to the motor. The speed of motor is counted in terms of rotations of the shaft per minute and is termed as RPM. The gear assembly helps in increasing the torque and reducing the speed. Using the correct combination of gears in a gear motor, its speed can be reduced to any desirable figure. This concept where gears reduce the speed of the vehicle but increase its torque is known as gear reduction. This Insight will explore all the minor and major details that make the gear head and hence the working of geared DC motor. 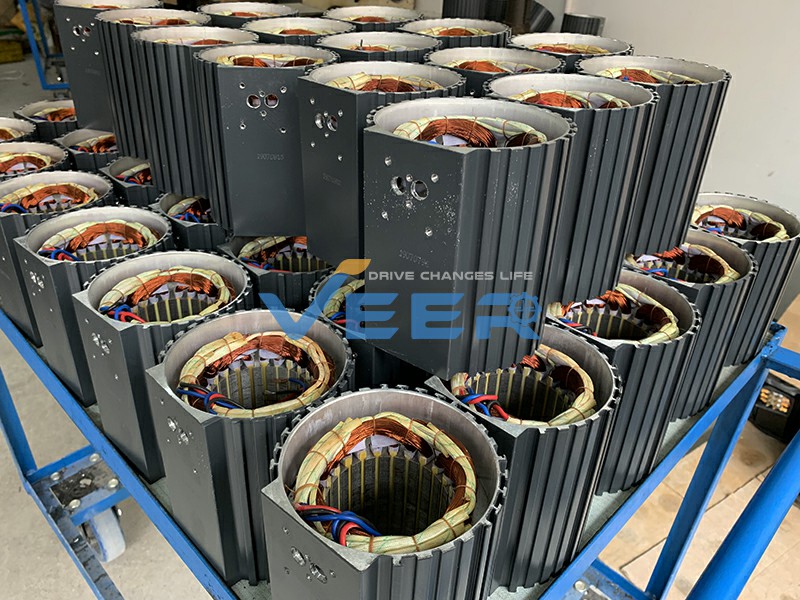 AC motors are different from DC or direct current motors in their use of alternating current, which changes direction. AC motors transform electrical energy to mechanical energy. AC motors are still heavily used in modern life, and you may find them in appliances and gadgets in your own home. An AC motor works by applying alternating current to stator windings, which produce a rotating magnetic field. Because the magnetic field rotates in this way, an AC motor does not need power or mechanical aid to be applied to the rotor. The rotor will rotate via the magnetic field and create torque on the drive shaft of the motor. The speed of rotation varies based on the number of magnetic poles in a stator. This speed is called synchronous speed. AC induction motors, however, operate with a lag or slip to allow the flow of rotor current. Different AC motors will have different numbers of poles and therefore varying speeds in comparison with each other. The speed of an AC motor, however, is not variable itself, but rather constant. This is in contrast to many DC motors. AC motors do not require the brushes (power contacts) or commutators that DC motors need.

Unlike toys and flashlights, most homes, offices, factories, and other buildings aren’t powered by little batteries: they’re not supplied with DC current, but with alternating current (AC), which reverses its direction about 50 times per second (with a frequency of 50 Hz). If you want to run a motor from your household AC electricity supply, instead of from a DC battery, you need a different design of motor.